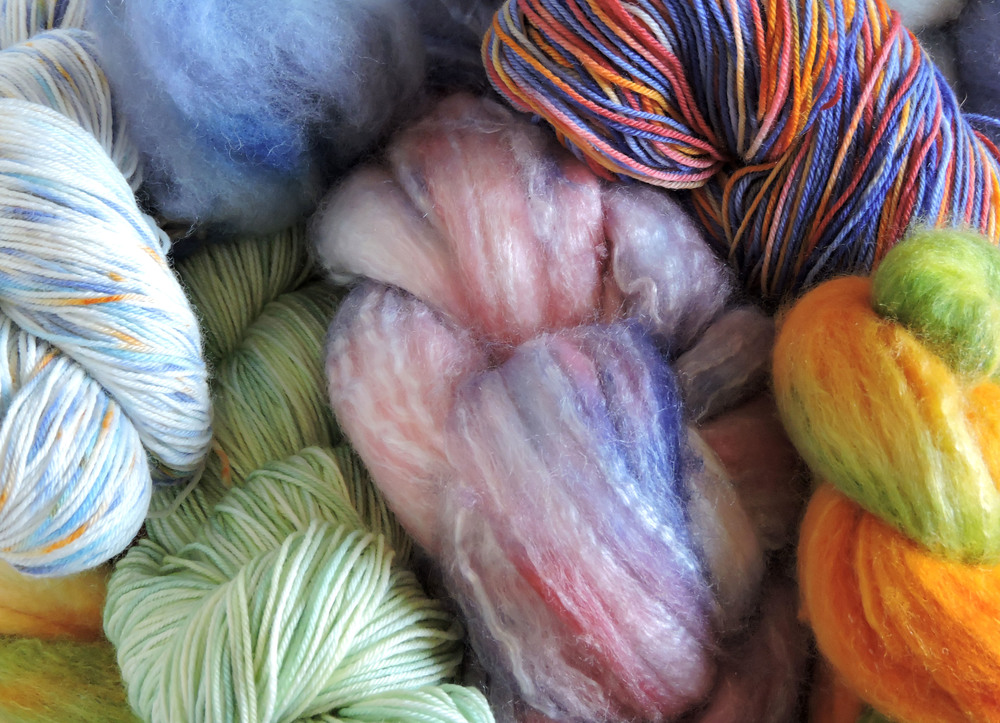 I can’t believe I haven’t blogged about this yet. Where have I been all summer?

This post is about the Great Dye Experiment that The Gabbers and I had at the end of August. I’ve talked about it on my podcast, but it just feels weird not to have also blogged about it.

So back in August, The Gabbers was playing around with dyeing. She had bought some naked, undyed yarn and some acid dyes and was playing around with both natural and acid dyeing. She invited me down to come play with the dyes to see what we could make, since she knew I had grabbed some undyed fiber from the GnomeAcres fiber stock sale over the summer. I had taken a Friday off to play with Penny (the adorable corgi) because both of my parents were on vacation and she had some separation anxiety over their leaving, so we figured I’d bring my fiber and the dog down to my sister’s apartment. The dogs would wrestle all day and we would dye yarn and fiber.

We actually started out with some yarn and not the fiber we’d been talking about. We’d looped our fiber in the recommended fashion (I’m not sure what book we were using) and were soaking it in vinegar to hold the dye later. She had already soaked the naked yarn she had ordered, so it was ready to go.

The first yarn we dyed was very experimental. We weren’t sure the concentration of dye and how saturated those colors would be, so the first skein was really for us to find our feet. We started out by hand painting the yarn to see how the colors would work. I decided to drip the dye onto my first skein to mimic the speckled yarns that are popular right now.

I think both of us were surprised at how low the saturation was when we dyed the yarn this way. I like the result, but it had looked much more saturated before we set the color. We then tried some more hand painting and ended up with a much more saturated yarn. 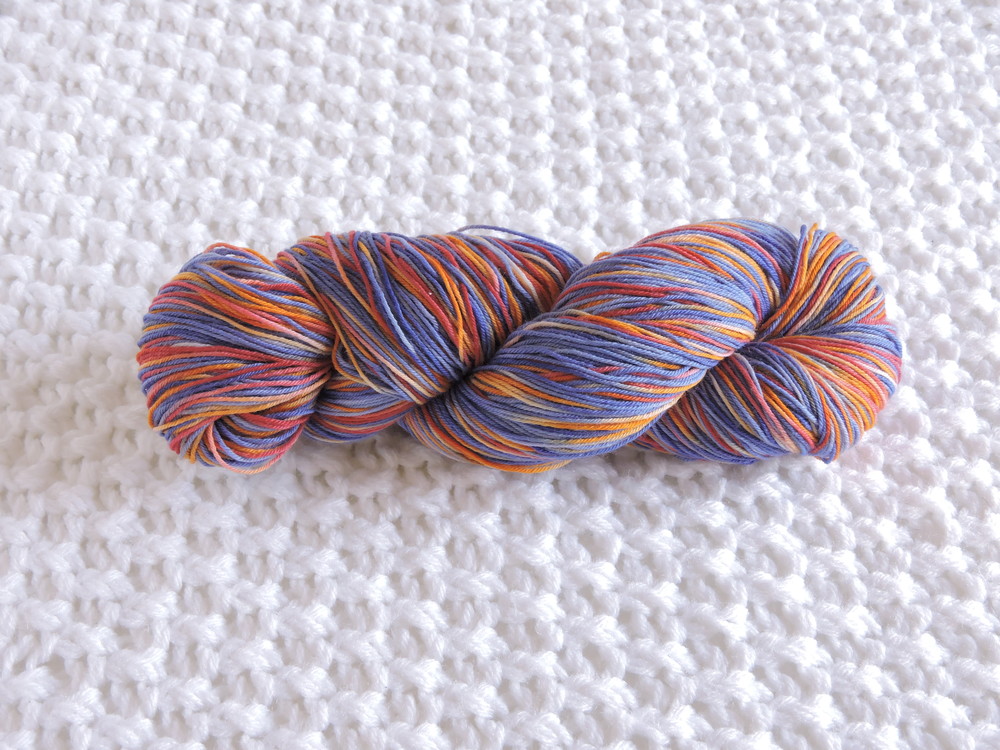 Since I’m not intending to replicate this yarn for sale, I’ll explain how I did the color. I arranged my skein on the plastic into a square (ish) shape. I started adding color to the corner sections, then to either side of each corner, and then filled in the straight sides. I have no idea how this will knit up, but I’m excited to see what kind of variegation that created.

Then the fiber was ready to play with. We started out trying hand painting the fiber, since that’s what we had been doing with the yarn. That was kind of a mess. The fiber just drank the dye and stuck to brushes, even when only dabbing straight up and down. I ended up just pouring dye into the fiber and squishing it down to distribute the dye in that section. Luckily, I wanted most of the color to blend well instead of clear color changes in this fiber and I think it worked out pretty well for my pumpkin fiber.

By this time, it was getting late and we knew we needed to speed things up if I was going to go home that night, which was my preference since I hadn’t brought anything with my but the dog and some fiber. So then we started working on some immersion dyeing stuff.

I started out with a braid of fiber in some hot water and just dumping some red mixed dye into the water and letting that cook in. When the fiber had absorbed that, I pulled out that fiber and tied some big, loose knots in it. I dumped it back into the water and poured some blue dye in. When that was absorbed, I pulled it out again and tied the whole thing into one loopy knot, put it back in the water, and poured some darker purpley blue dye into the pot. The goal was the same principle as tie-dye. The first layer of dye would be covered in the knots, so other parts of the fiber would have the blue over-dye. Then both those sections would be covered in the big knot and the purple-blue dye would over-dye only part of the fiber. And this was the result:

I like the way the colors played, but I don’t think I’ll do that with fiber again. The fiber was so sticky when it was wet and I had to be super careful when I untied those knots. I didn’t want to pull the length of fiber apart and I know I partially drafted parts of it when I was pulling the knots out. Luckily, it fluffed up when it dried, so it’s not that noticeable.

The I did some more immersion dyeing with my last bit of fiber. This one I mostly just played with the amounts of dye in the pot. I had some of the blue and then some of the purple-blue and I actually got a pretty cool effect due to the fiber being too fluffy for the dye pot. Some of the color really concentrated where the fiber touched the pot and the pot strainer and the parts that weren’t touching the pot or pot-strainer has a much softer color dye.

Then I rushed through dying the last bit of yarn, which actually turned out really nice. I threw some yellow into the dye pot, but there was still a little bit of the purple-blue in the pot, so it ended up a light, soft yellow-green. I tied the yarn in a few knots and tossed in some green, tied it into another big knot, and threw in another shade of green. It ended up being this nice sort of light, tonal green that I really like.

And that was my part of the yarn dyeing experiment! Will I do it again? With the space, time, and some money to get started? Sure! It was fun and I liked the yarns I ended up with. I’d love to play with the color dyes more and how they mix with each other, but I don’t think I’ll be able to do it again any time soon. Because of where I live, I cannot block off the kitchen to dye and I do not have the dedicated space for the actual dyeing or the drying. If this is something that I’m really interested in pursuing while I live here, I may pick it back up in the spring and summer and see about using the burner on the grill outside to do the heat setting and the clothesline for the drying.

The only thing I can really see myself doing anytime soon would be natural dyeing with foods. I know onion skins, cabbage, and black beans are among the food items that can dye yarn and I’m sure there are other things that I’m not thinking about right now. I’m definitely interested in doing some more research for that.

Until then, I’ll just have to enjoy the products of my experiment.