This past Friday my mom and I headed to our final yarn event of the season, Stitches East 2014!

(I say last, but I’m pretty sure I’m still heading up to the New England Sheep and Wool Festival in November, so… we’ll see.)

This is our second year going to Stitches and I think we managed to plan a little better this year.

– We planned to eat lunch at the Arch Street Tavern this year. We managed to skip lunch entirely last year due to being overwhelmed and running on crazy adrenaline.

-We printed out maps of the show floor and, on our first tour of the show, marked down the booths that we wanted to return to for purchases. Last year, we had to split ways and run around in opposite directions because we couldn’t remember where we saw things we wanted.

– We brought snacks. I guess you’re technically not supposed to do that, but when we sat to munch on a couple of granola bars, a lady raised a sandwich out of her purse in solidarity. I have a tendency towards blood sugar issues and my mom was hurting through some flu shot side effects (she gets sick after them every year, but she’s a nurse so she has to get them), so we wouldn’t have made it through the show without snacks.

-We both came to this show with a stronger resolve to buy for specific projects instead of just whatever we found to be pretty. Last year was pretty haphazard, in terms of purchases. I ended up buying more spinning roving this year than yarn for that reason. You generally know what you’re going to do with roving and there’s plenty of time for me to figure out if I want to use it or sell it while I’m spinning. Last year we were immediately blind sided by a booth with Lord of the Rings themed color ways, so budgets were pretty screwed from the start. The only I bought without a clear plan is the clearance yarn I’ll show you below and the only thing my mom bought without a clear plan is some of the Lord of the Rings themed color way from the same booth left over from last year (in Bree, which is a gorgeous auburn variant).

-We made a stop on the way home to buy loose leaf tea from Teavana at the mall. This doesn’t sound like much, but when you spend hours doing nothing but walking and then have to drive the hour home, it can wear on you. It does on me, anyway. Getting out to check out the new Disney store and buy some fancy tea worked out some stiffness in my legs. My mom bought her very first loose leaf tea (pumpkin spiced brulee), which was exciting.

And now the part that everyone likes, the stuff! 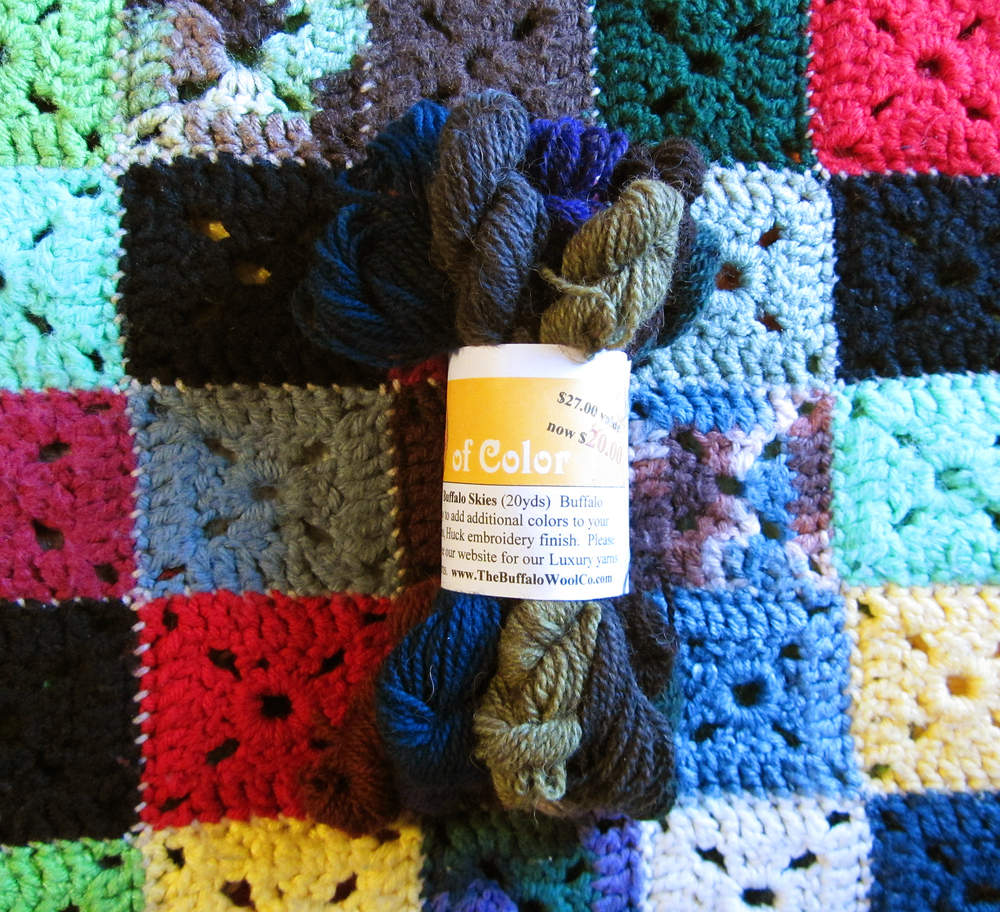 I bought a set of mini-skeins from The Buffalo Wool Company. This booth was really cool. And by booth, I mean a big travelling van set up to be a store that spilled out onto the show room. The lady running the joint had tons of information about buffalo wool and its properties and there were a handful of really interestingly textured buffalo wool and buffalo blend wool.

A lot of it was pretty pricey, but I couldn’t leave without something buffalo. This set of mini-skeins was only $20 and there were some fantastic cowls on display with them. I’m planning on a striped cowl, which will easily use up all of the yarn without leaving very much left over. 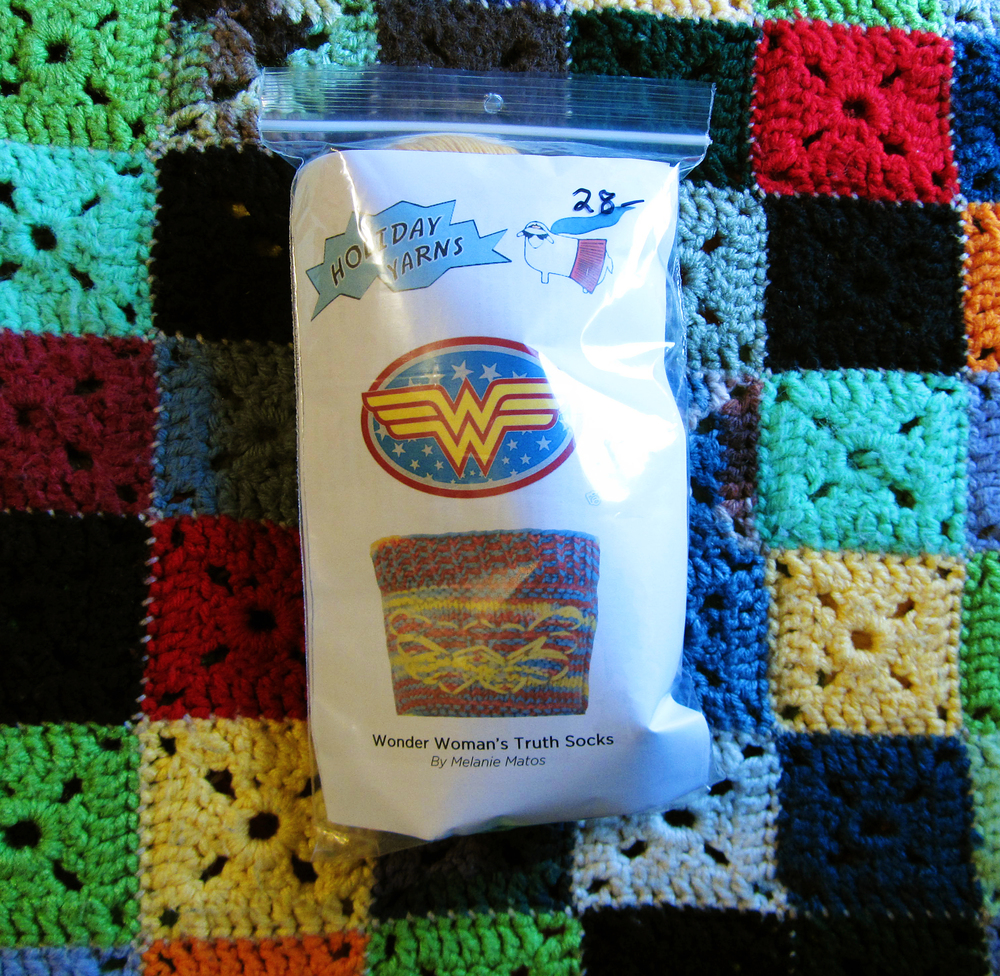 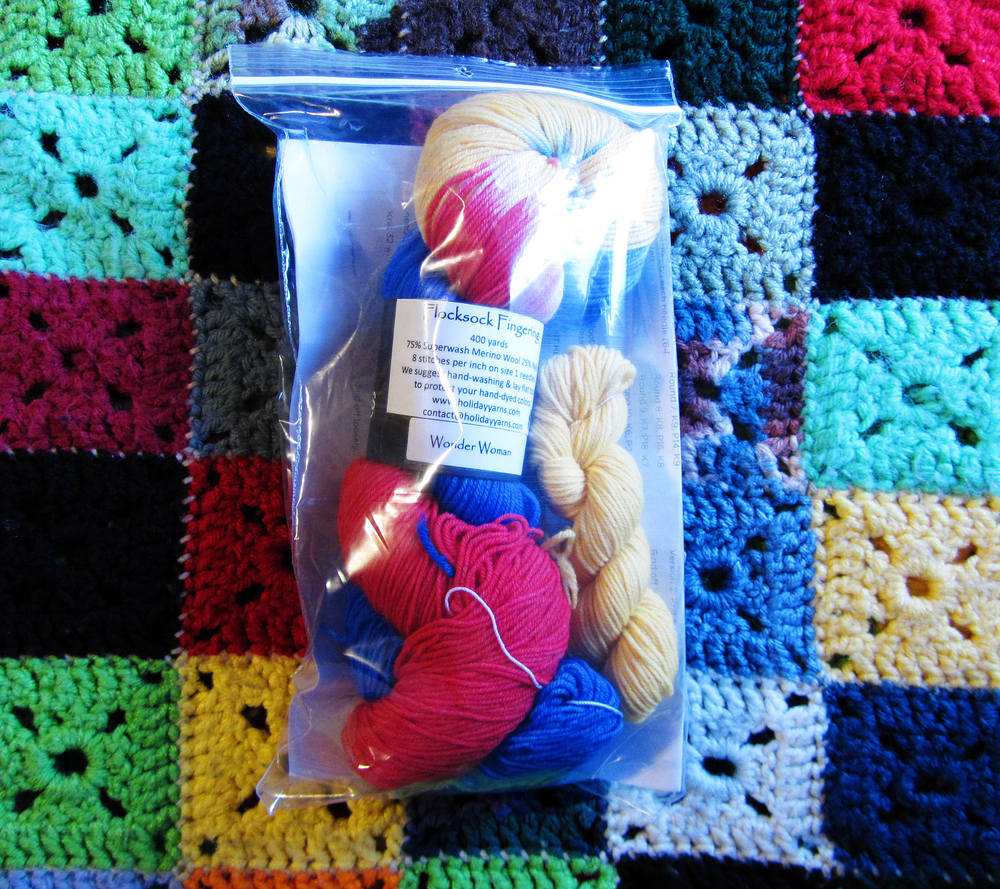 This booth was lovely. Lots of beautifully dyed yarns, but what caught my eye was the sock kit display. There were almost a dozen mannequin feet with fantastic superhero kits socks. I didn’t see all of the superheros from the models as kits on the racks, but the Wonder Woman kits were there and I really liked how the Wonder Woman yarn was dyed up. So I bought a kit. Can’t go wrong with too many socks, right? 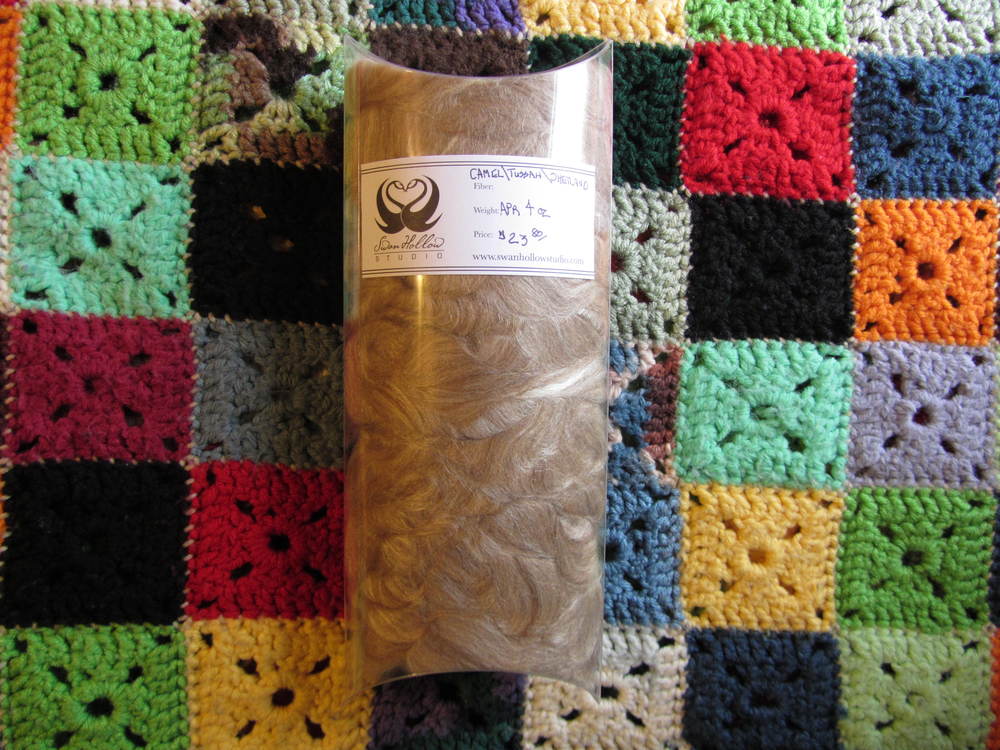 My hands ache to touch this stuff just looking at the photo. Swan Hollow Studios had a big sprawling booth filled with incredibly soft fibers for spinning and silky yarns. The fibers were all piled around in these huge open sacks, like giant bean bag chairs, so you could just stick your arms in the wool and touch it. I kept walking in circles in the booth coming back to this beautiful mass. It’s a blend of camel, tussah silk, and Shetland sheep wool. It’s so soft that some of the more calloused parts of my fingers could barely feel it. I’m am very excited about spinning this up. 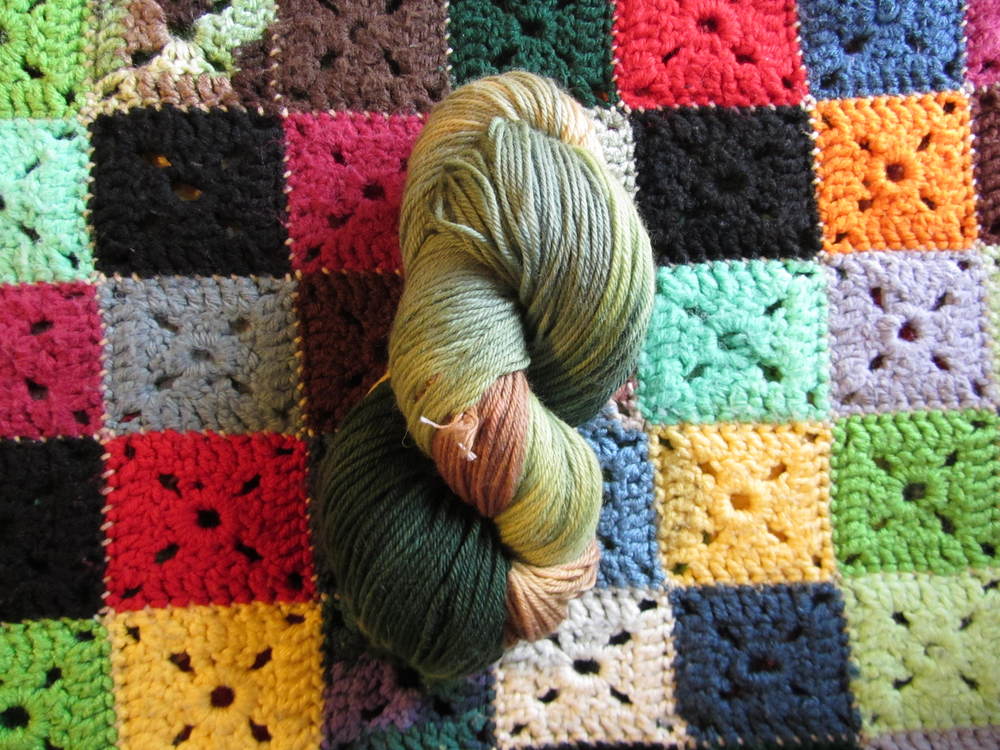 I’m terrible. In my excitement, I forgot to get the name of the vendor at the booth. Also, this was a skein I pulled out of the clearance for $9.00 bin, so it doesn’t have a label. The receipt doesn’t have the vendor name and I paid in cash, so there’s no electronic receipt. It’s mystery yarn that’s worsted weight (I’m guessing). All I know for sure is that I love the colors and it’s soft. 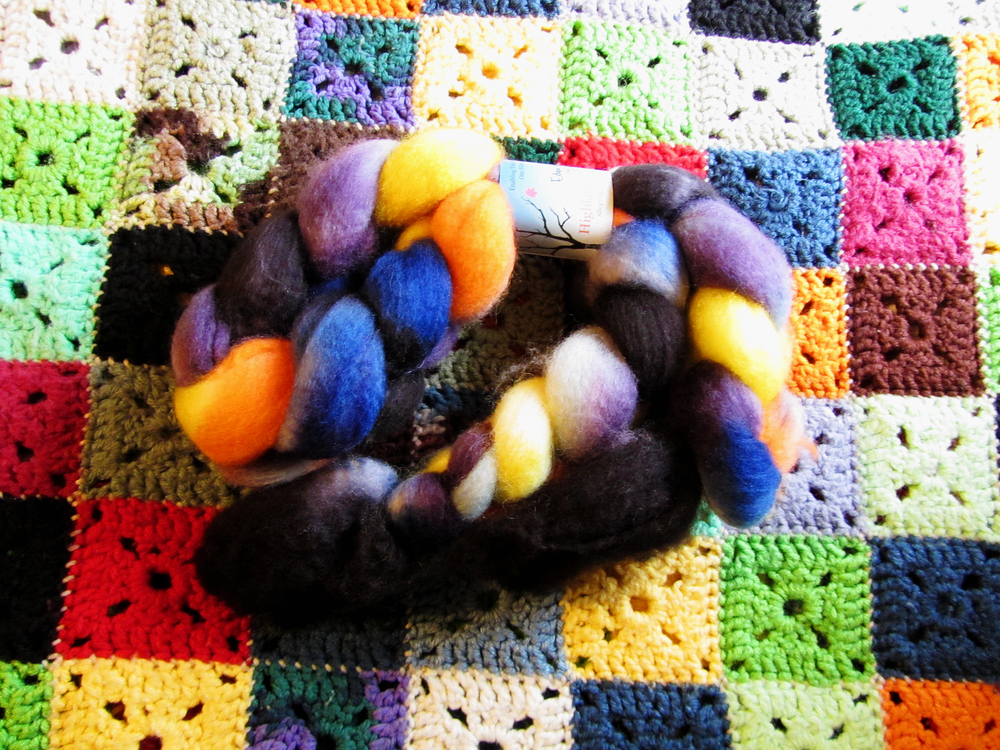 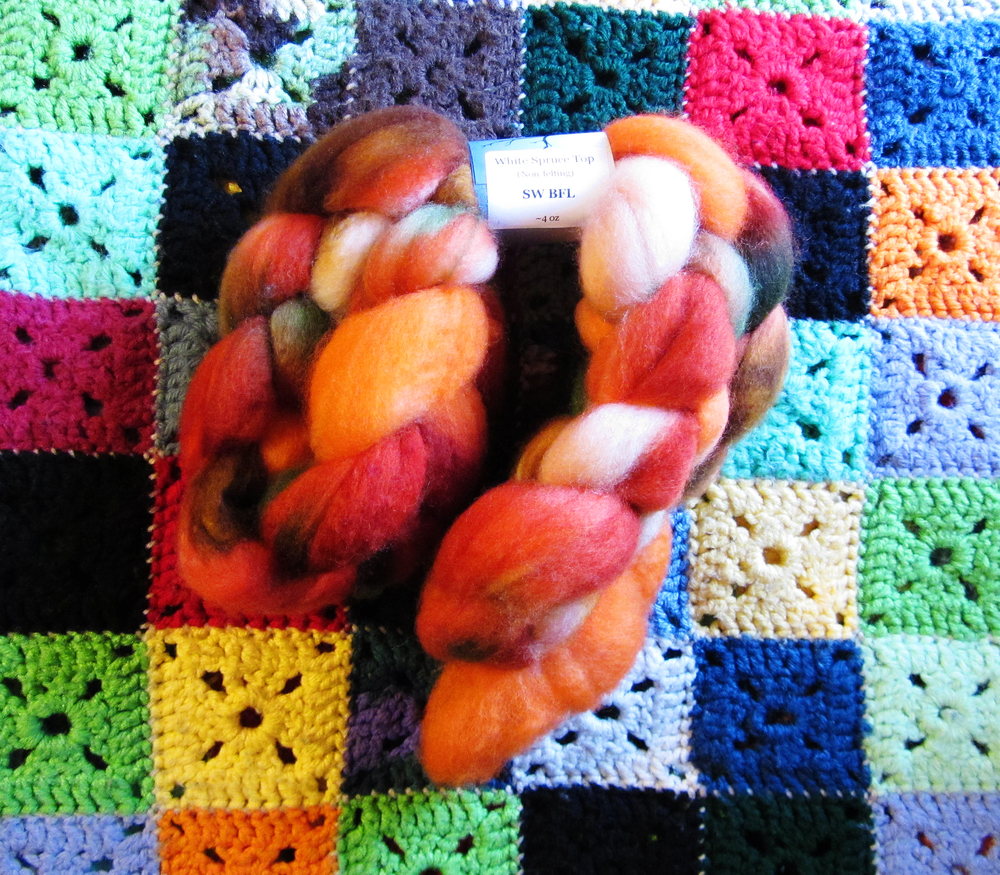 And more roving. These are colorways The Rom and The Edge of the Inferno from Highland Handmades. They’re both braids of BFL, which is a wool that I consistently have enjoyed spinning. It’s soft, but sturdy. I find that the fibers aren’t smooth enough to pull loose if I spin the wheel too fast, but are very soft and don’t irritate my dry hands while drafting.

I also love the colors that she uses in her dyes. All of the braids in the booth were beautiful color combinations and it was hard to pick just two of them. I hope to buy more from her in the future.

And that was Stitches! I didn’t manage to really get any photos of the show floor or anything. I was too excited to be putting my hands all over all the yarns and things, and there were too many people around for me to feel comfortable taking photos. I don’t mind taking photos around a lot of people, but I feel very uncomfortable taking photos of strangers when you can see their faces clearly. It’s a thing. Maybe I’ll get some photos of the booths and things next year. All in all, a great event that I’m glad to say is probably going to be an annual thing as long as it’s in Hartford.