Yesterday was my first official yarn event of the season! My family and I headed out to Coventry for the Fiber Fest theme weekend of the farmers’ market!

I love this farmers’ market. The Fiber Fest booths were fewer this year, but it was nice to walk through the tents and see some familiar yarn-folk and meet some new ones. My mom was keeping half an eye out for a yarn to match the yarn in the cowl she was working on because she needed another skein and ended up finding the exact match from the vendor that she’s pretty sure she bought the original skein from! It was hilarious. She couldn’t remember where she’d bought the yarn from and she had lost the label, but it all worked out.

There was a lot of lovely yarn and wool to touch everywhere. And the regular vendors for the market were great, too. Our favourite jam and pie folks weren’t there this year, but we made a stop at the fudge stand and the new cannoli truck. There was a lotion bar and handmade chapstick stand that I grabbed a card from which I may end up buying from online. It was a great trip.

And The Gabbers brought Audrey the corgi to the market, which everyone loved. It was hilarious. Audrey doesn’t particularly like other dogs and generally won’t be social with them, but there were dogs everywhere. She avoided all the dogs her size and smaller and wanted to say hello to all the giant dogs. GIANT DOGS. A gorgeous black St. Bernard and an Irish wolf hound and another giant black dog whose breed I can’t recall… But she didn’t want to stick around too long once she’d greeted the dogs and all the big dogs were disappointed that they didn’t get to play.

Frankly, I think it’s Audrey’s ploy to make other humans pay attention to her. Folks love looking at the little corgi sniffing out the dogs five times her size. And she got plenty of human attention, too. 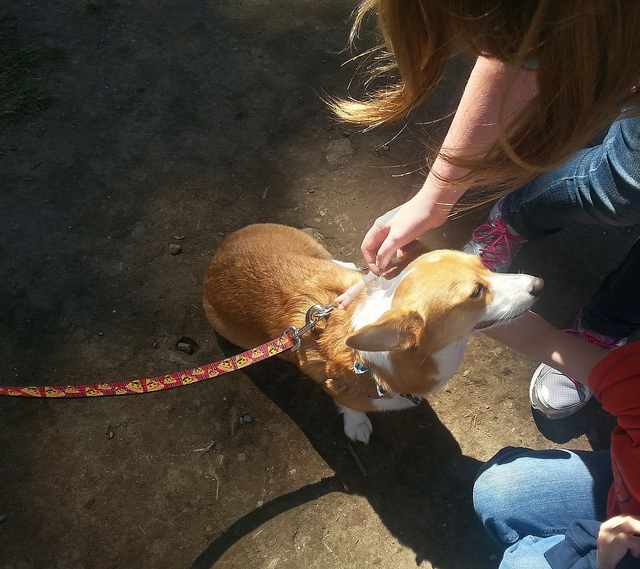 We didn’t end up eating at the market, which is normally our tradition, but Dad had it in his head that we’d find some kind of outdoor cafe thing to eat at. We ended up eating Taco Bell in a park in Willimantic, which is fine, but I missed eating great food truck sandwiches. We then met up with Pickleface at college to drop off some stuff and catch up on his new college-ness and get ice cream. It was good times.

I worked on my Event Socks during the car ride, but didn’t end up getting very far due to dog in the car and some elbow pain, but I did finish the gusset and did a couple of rows on the foot. So that’s progress!

I didn’t end up actually buying any yarn at the market. I did, however, re-establish my roving stash for spinning: 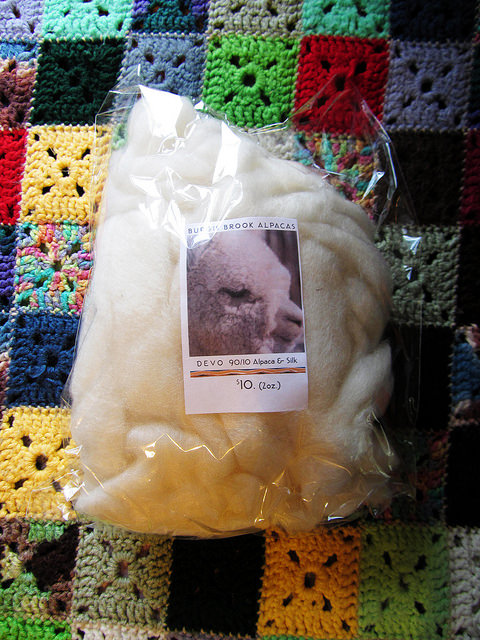 Some white alpaca and a big ol’ blend of alpaca/BFL/merino stuff that’s really soft. I’ll probably spin these together.

This is some gorgeously dyed BFL that I had to have. It’s beautiful. I’m including two photos because I needed everyone to see both sides of this skein. 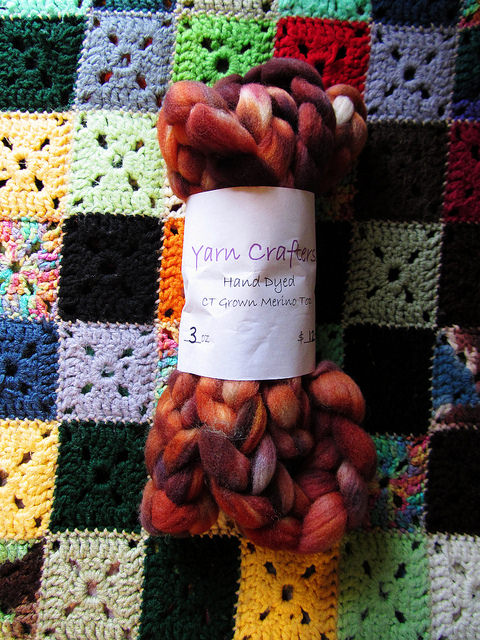 And these two braids are lovely as well. I think I’ll be spinning these separately because I don’t think they’d quite work as combo-plies, but that green is really calling my soul and I love a good autumnal red/orange/purple.